by Editor in Events

Delta Governor, Senator (Dr.) Ifeanyi Okowa, has charged the state’s Board of Internal Revenue to carry out reforms that would enhance revenue generation by the state government.

He challenged the board to ensure that all those who were supposed to be in the tax net were captured.

The governor gave the charge on Friday in Asaba while inaugurating Mr Austine Igbine as a member of the Revenue Board.

Four members of the five-member board were inaugurated on Monday by the governor, who announced that the fifth member who was going through confirmation by the House of Assembly would take his turn during the week.

Okowa said that there were lots of businesses in the state that were doing well which the revenue board should include in its tax net instead of relying solely on Pay-As-You-Earn (PAYE) for tax revenue.

He stated that funds were needed by government to execute its mandate to the people, but deplored prevailing situation where the state was yet to meet its internal revenue generation target. 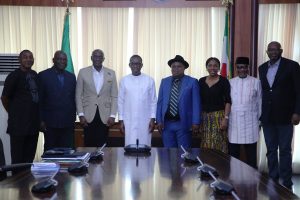 “It is very important that we increase our taxes without impacting negatively on the lives of our people, particularly those who are living below the poverty bracket.

“The journey before you and to others in the DBIR is to find ways of reforming the place and generating revenue in a smart manner where we are able to bring those who ought to be in the tax net to the net.

“We must ensure that our people who have viable businesses pay appropriate taxes; we know that it will require a lot of ingenuity to succeed.

“It is my hope that you will work with other members of the board to reach out to our people because, our IGR as at today is mainly limited to those who are in the PAYE circle.

“There is no doubt that we have improved the tax administration in our state, but there is a lot of room for improvement, because we have not been able to meet the set target.

“We should be able to meet and surpass the tax target, because most states of the country have been able to achieve that, so there is no reason why Delta cannot achieve set targets.

“There are so many taxes which we are not collecting; it is a civic duty, but unfortunately many people do not pay tax,” he said.

In his response, Igbine thanked the governor for giving him the opportunity to serve the government and people of Delta, and assured that he would work with other members of the board to meet expectations in line with the stronger Delta initiative. Carry On From Where Your Predecessors Stopped, Okowa Urges Political Appointees