2023: Okowa calls for unity, fellowship among ethnic groups in Delta by Editor in News

Governor Ifeanyi Okowa of Delta has urged Urhobo people to unite and fellowship with other ethnic groups in the state to enable them to achieve the aspiration of producing his successor in 2023.

He particularly advised Urhobo indigenes seeking to become governor in 2023 to do so in a friendly manner, saying that power belonged God and He gave to whom He pleased.

Okowa announced that the state government would spend N9.5 billion on the first phase of Storm Water Drainage project to address flooding in Warri and Uvwie areas.

He also disclosed that his administration had concluded plans to embark on the construction of a bridge across Ewu River, which would provide access to no fewer than seven Urhobo communities.

The governor added Effurun-Otor bridge project would be completed and inaugurated in the first half of 2020, and stated that 25-kilometre Okwagbe road project in Ughelli South Local Government Area had been completed.

He said that more developmental projects had been earmarked for every part of the state in the dry season, noting that the projects were aimed at making life more meaningful for Deltans.

He stated that Warri, Uvwie and Environs Development Agency was established to give impetus to the development of the area, adding that the agency had commenced the process of awarding contract for the first phase of the drainage project in Warri in the area. 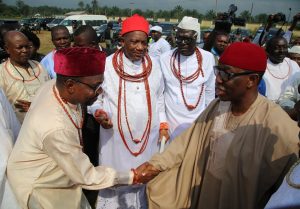 Okowa stressed the need for “oneness and peaceful co-existence among various ethnic nationalities to enable government deliver on its development blueprint for the state’’, pointing out that the cooperation of all was needed in tackling lingering national security challenges.

Describing the Urhobo Cultural Centre as a “centre for peace and development which is in line with our administration’s stronger Delta agenda’’, he announced N50 million donation for the completion of the centre.

He urged well-meaning Urhobo sons and daughters to also contribute towards the completion of the project.

On peace efforts by government in the Ogbe-Ijaw-Aladja crisis, the governor said that the decisions reached by the State Executive Council would be implemented and disclosed plans by his administration to build a model technical college for people of both communities.

Earlier, President General of Urhobo Progress Union, Chief Moses Taiga, had in his address,  emphasised the need for the people to speak with one voice irrespective of socio-political affiliations.

He urged them to be united if they must achieve a greater, stronger and peaceful ethnic nationality.

On 2023, Taiga said that it was imperative that the Urhobos produced the next governor of the state, and sued for unity, focus, coherence, harmony and support from other ethnic groups for the actualization of the goal.