by Editor in News

Delta Governor Senator (Dr) Ifeanyi Okowa has called for cooperation  from Deltans in tackling environmental challenges in the  state capital territory and its environs.

Governor Okowa made the call today, (10/12/19) during an inspection tour of ongoing storm water drainage and road construction projects around the State capital.

Governor Okowa stated that due to the level of construction work being executed daily there was the need to ensure that the environment remained clean. 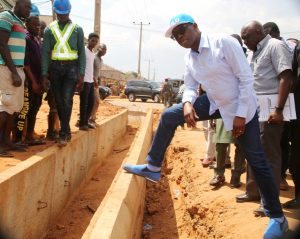 According to him  going through the state capital territory and its environs ,there is a lot of construction work being carried out and I must appreciate the Delta State Capital Territory Development Agency and its Director General, Mrs. Onyemaechi Mrakpor because a lot of work has been carried out by the agency to sanitize the environment “.

“I must appeal to our people to cooperate with the agency in its bid to give us a more befitting capital territory where we can be proud of , and where we live as there are some environmental concerns that have to be addressed and the agency has stepped up to intervene and I appreciate the work that the agency and its officers are doing”.

Accompanied by top government officials including the Commissioner for Works,Chief James Augoye ,Governor Okowa expressed satisfaction at the pace of work being executed by the various contracting firms ,adding “I must say that I am very impressed with what I have seen and I can now also say categorically that we are having value for the money we are spending in terms of storm water control and road constructions”. 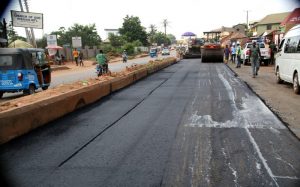 When we approve projects in Exco you do not know how extensive the projects could be until you go on site and going on site to see the massive construction projects going on across the capital territory and its environs,
“We as a government  will continue to do the best that we can because  infrastructure development is a very critical sector for the economy and growth  of the state and I think that the contractors are doing very well” the governor said.
Briefing newsmen after the inspecting the facilities at the Asaba General Hospital, Governor Okowa disclosed that the project would be completed soon and its commissioning would take place in the first quarter of 2020.