Atiku in a hurry to restore hope for Nigerians – Aniagwu 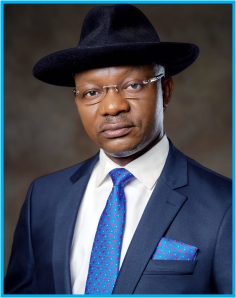 Speaking on AIT on Monday night, Aniagwu said that most Nigerians were looking up to the PDP to rescue the country from it’s present comatose state.

He accused the ruling All Progressives Congress, APC, of failing on their campaign promises and lying about their achievements.

According to him, one of the greatest sins that APC has committed is not just their inability to deliver on a number of their promises, particularly insecurity and economy, but also lying about the efforts they are putting in.

“I listened to what they said that banditry, terrorism and kidnapping is a thing of the past. I pray that it is so. We want to be optimistic and I would want them to perform.

“You recall that when Buhari won election, I said that I will join them in praying for Buhari because if Buhari succeeds, all of us have succeeded.

“His success means the success of all of us and the failure of Buhari means the sufferings of Nigerians and that you have already seen.

“So thats the more reason why most Nigerians are optimistic that the PDP is that party that would be able to make the difference,”

He said Nigerians were not interested in any drama but how to get the country working again for their good and urged leaders to bury their hatchet in the interest of the nation.

“If you ask every Nigerian today, they are not interested in any drama, Nigerians want to have jobs, they want electricity to work and the economy to come up.

“Nigerians want insecurity to stop, they want a country that is very very united and not divided, any other thing you are doing outside that means that you don’t care enough.

“The big elephant on our head is that our country is at the precipice on the account of the mismanagement of our diversity by the APC, and that is the most important thing for anybody who thinks well of this country.

“What is paramount is how to rescue our country, so when people begin to talk about equity, you must be able to ask yourself what is this their definition of equity?

“The best equity we can have now is to first of all win election and begin to think of how we can bring our country out of where we are now and not to think of what are they going to share to you.

“If anybody wants to fight for Nigeria now, what is important is to join Atiku along the line of bringing policies and programmes that will rescue our country and not to begin to put up certain issues.

“We just do hope that as the leaders of the party are already taking steps, and i hope that they will be able to resolve these issues and get everybody on board.

“The party and our candidate are interested in getting everybody on board because we don’t want to leave anybody behind, hence, they are trying to placate those who tend to be aggrieved and at the same time get everybody to be on the same ship so that we can sail smoothly,” he said.

The Delta Information Commissioner said the crisis in the party did not start with the nomination of the Vice Presidential candidate but as a result of personal ambitions by certain leaders.

“I am actually very happy that in the midst of all these issues, the candidate of PDP, Atiku Abubakar is still very busy putting a whole lot of things together because he realises that Nigeria is at a cross road and that there is a need to save us from where we are,”

Aniagwu said elders and leaders of the party were working hard to resolve the issues raised and urged stakeholders to reach a compromise in the interest of the party and Nigerians who earnestly look up to the party for rescue.

“Burying this internal squabbles which I believe the elders are trying as much as possible to find solution to, because the PDP is a party to watch and it is set to win the general election and form the next government in 2023.

“It is true that a whole lot of issues have been raised and one beautiful thing about this whole thing is that, nobody can quote Atiku Abubakar to have said or altered any word attacking or disagreeing with anyone.

“The man has continued to pursue peace both in countenance, actions and even in the face of very very glaring provocations.

“Atiku is in a hurry to restore hope to Nigerians, he is already thinking of how he can form government from day one. That the moment he assumes office, from that day the government starts running, not that he will begin to search for who will work with him.

“In the midst of all these noise he is still very busy, keeping his eyes on the ball and the ball is to score a goal and that goal is to be able to rescue Nigerians from where we are at the moment.

“Reconciliation is ongoing and he is not allowing the ongoing noise to drown his ambition and goal of rescuing our country,” he stated.