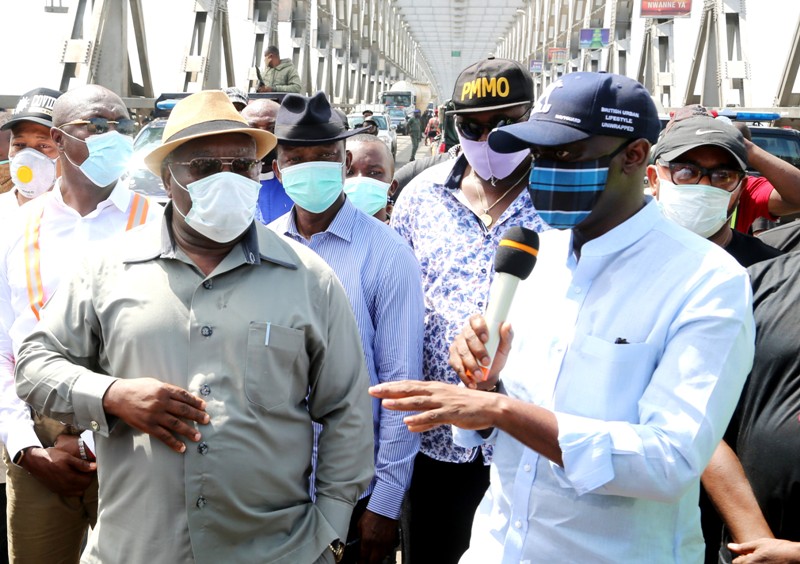 Delta and Anambra governments on Tuesday agreed to work together to ensure free flow of traffic on River Niger bridge.

Briefing newsmen on the outcome of the meeting, Secretary to Anambra Government, Prof Solomon Chukwulobelu in company with his Delta counterpart, Mr Chiedu Ebie, said that both governments decided to work together on the enforcement of the lockdown as it concerned movement at the bridge, in the interest of the suffering masses.

He said that it was intended to free the bridge of heavy truck constrained to be on it for long periods,  adding that the strategy was to ensure that the integrity of the bridge was not compromised.

According to the SSG, both states resolved to push back their processing points a bit further from the bridge in order to ensure that heavy vehicles do not get stuck on the bridge.

He said that there would be exchange of personnel from both states to ensure the integrity of the screening being conducted on human and vehicular traffic at the border post.

Chukwudebelu said “on behalf of Anambra and Delta governments, we are very pleased to have met at the foot of the bridge on the Delta side this morning to see for ourselves and to hear from those who are impacted by the lockdown.

“After discussing and taking advantage of the various issues concerned, the two governments have agreed as follows:

“The idea is that those trucks that are not essential or carrying essential commodities can be processed and turned back very quickly so that those that come into the bridge can have faster exit on the bridge, thereby ensuring that there are no heavy trucks on the bridge at any point in time.

“This is to ensure that the integrity of the bridge is not compromised and also to minimise the waiting time and the suffering of the people running these trucks.

“We have also agreed and this is for the benefit of the truck drivers – each truck should have just the driver and two other persons only. If you are carrying more than three, that is the driver and two helpers, that truck will not be allowed to proceed further; it will be turned back.

“We further agreed that if you have no business coming unto the bridge, that is a trucker, and you are not carrying essential goods, please do not try to breach this arrangement because you will be turned back,”

He disclosed that the Federal Government had given approval to some construction companies to go back to site and assured that both governments would do everything possible to ensure they were not affected negatively.

“There are construction companies that have commenced work as directed by the Federal Government; the two state governments will do everything possible to ensure that their activities are not impacted significantly.

“We appreciate that this is a very difficult time for every person but so far, people living on both sides of the bridge have been conducting themselves very well and we appeal that they should continue in that direction,” the SSG added.

On his part, Delta SSG, Ebie, apologized on behalf of both governments for the inconveniences and hardship being faced by the truck drivers as a result of the steps being taken by both governments to ensure implementation of the inter-state lockdown as ordered by President Buhari.

“We appeal to transporters to note that inter-state movement is still banned and we appeal that you don’t make it more difficult for us because it is already so now.

“It is taking its toll on everybody and we ask that you please cooperate with us and work with us to ensure that we keep ndi Anambra and Deltans safe at this period.” he stated.

Ebie thanked Commissioners of Police and members of the Task Forces from both states and security agencies for their support.

Commissioner for Information in Delta, Mr Charles Aniagwu, in an interview shortly said “any truck that is not on the essential list will be impounded’’.

“The decision is to kill COVID-19 and not to kill the businesses and that’s why we are intervening the way we are doing.”