Delta Governor, Sen. (Dr) Ifeanyi Okowa, on Wednesday, said his administration will sustain its widows welfare scheme aimed at ameliorating the plights of the less privileged widows in the state.

Okowa disclosed this during the opening ceremony of the “First National Summit on Widows’ Rights and Welfare -Delta Experience” held at the Event Centre, Asaba, which was organised by the Office of the Senior Special Assistant to the governor on Social Investment Programmes, Mr. Isioma Okonta, to mark the 2021 International Widows’ Day. 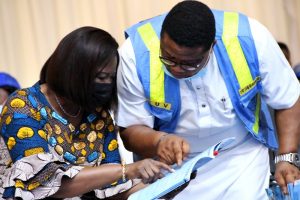 The governor who was represented by his Deputy, Deacon Kingsley Otuaro, thanked God for inspiring his administration to institute a welfare scheme for widows in the state through the state widows welfare scheme, and reiterated the need for total prohibition of harmful widowhood practices.

“I want to thank God for what He has inspired us to do for widows in the state through the Delta State Widows Welfare Scheme.

“I want to thank God and to assure our mothers and sisters (widows) that we will continue to do our best to ensure that we sustain the programme,” the governor said.

He urged the widows to pray for improved economic fortunes of the state to enable it bring more poor and vulnerable widows into the scheme to alleviate their sufferings occasioned by the demise of their husbands.

In her remarks, Wife of the governor and Founder of the 05 Initiative, Dame Edith Okowa applauded the Coordinator of Delta State Widows Welfare Scheme, Elder Isioma Okonta for effectively driving the vision of Governor Okowa for the less privileged widows in the state.

Dame Okowa who harped on the need for a legislation against harmful traditional and cultural widowhood practices in the state and the country, called on women to show love towards one another.

She also called on the Coordinator of the widows welfare scheme to explore the possibility of incorporating skills acquisition and entrepreneurial training programmes into the scheme where young and vulnerable widows could be trained and given starter packs at the end of their training to alleviate their plights.

They applauded Governor Okowa for finding it expedient to look into the issues concerning widows welfare in the state, adding that an Executive Bill should be sent to the state House of Assembly for passage and subsequent assent by the governor so as to sustain the welfare package for widows in the state.

While saying that women have right to their husbands’ property, the monarchs called on women to always speak out, pointing out that they should not wait for somebody to speak for them.

Earlier in his welcome address, the Senior Special Assistant to the governor on Social Investment Programmes and the State Coordinator, Widows Welfare Scheme, Elder Isioma Okonta said the widows welfare scheme was non-political, adding that the scheme also cuts across all religious divides.

Elder Okonta said that the names of widows enrolled in the programme were derived from the list collated and verified by the community leaders, religious leaders, civic leaders and traditional rulers and institutions.

According to him, only verified poor and vulnerable widows residing in Delta State were eligible for enrolment into the scheme, pointing out that a widow who is a civil servant or financially stable was not eligible for the scheme.

“Currently, there are 5,607 widows enrolled in the Delta State Widows Welfare Scheme. These widows have been benefiting from the scheme since 2018. The widows enrolled are predominantly aged, illiterate and have difficulties at financial independence.

“They are drawn from the 25 local government areas of the state and the 270 wards across the communities. The widows received N5,000 as monthly stipends and free healthcare services,” Okonta said.

In his speech, former Nigerian Ambassador to China and Cote d’Ivoire, Jonathan Oluwole Coker who was a guest speaker at the ceremony, commended Delta State government for its passionate commitment towards the welfare of less privileged widows in the state, just as he called for a multi-sectoral approach in addressing issues on widows rights.