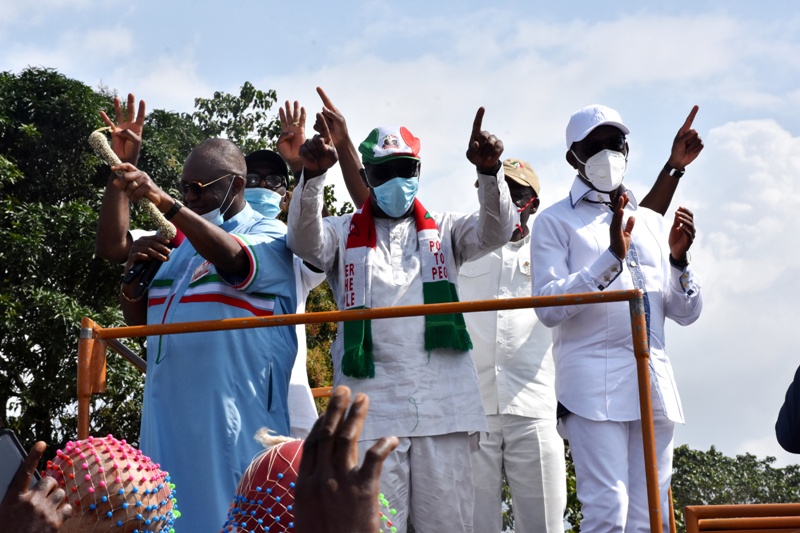 Delta Governor, Sen. (Dr) Ifeanyi Okowa on Wednesday called on the people of Edo to re-elect Governor Godwin Obaseki to bring all states in the region under one political party.

Speaking at a PDP Ward rally at Ekpon Ward 9 and 10, Igueben Local Government Area of Edo, Governor Okowa said as Chairman of South-South Governors Forum it is the wish of the Governors of the region to remain in one political party for rapid development of the region.

Okowa urged the people of Ekpon to vote massively for Governor Obaseki, describing him as a very good man.

“You know your Governor Mr Godwin Obaseki is a very good man, if he wasn’t a good man I will not be here.

“I am proud of the people of Ekpon because of their support for the PDP over the years. Don’t be afraid of any intimidation vote and defend your votes.

“The whole of South South is now made up of PDP Governors family. There are six states in the South South and am the current Chairman of the Governors Forum in the South-South and we do not want Edo State to go into another party anymore.

“We want all Governors of the South-South to remain in one political party and that is why we are interested but I am particularly interested.

“For those of you here, we know you are voting for him but please we want you to go from home to home and from person to person to campaign to the people,” he said.

Okowa who also inaugurated the over 2km newly constructed reinforced concrete drain and asphalt overlay of Okuta Road in Ebelle community commended Governor Obaseki for attending to rural roads despite the economic crunch.

“I must commend you for being able to construct several rural roads in Edo despite the economic challenges facing states across the nation.

“I believe God almighty will see you through this election so that you will build more roads for the good people of Edo.” Okowa stated.

In his remark, Governor Godwin Obaseki thanked his Delta counterpart for coming to support him in his campaign.

He assured the people of provision of electricity, water and construction of internal roads in the community.

“Let me thank my brother Governor, Senator Ifeanyi Okowa for coming to support us. I am aware he established the first private hospital in Ekpon years ago.

“He has assured me that we will collaborate to reconstruct the road connecting Edo and Delta, he said, adding that “When i construct up to Edo boundary, he will construct from Delta to the Edo boundary.

“So I appeal to you all to come out enmasse to vote for me and my able Deputy come September 19 for us to actualise these promises,” he added.

Earlier, National Vice-Chairman of the PDP, Chief Dan Orbih urged the people of Ekpon to continue their support for the party adding that leaders across the state where in support of Obaseki’s re-election.

“I have had the opportunity to talk to leaders across the state and they are all in support of your re-election, so just keep doing your good work Mr Governor and the people will re-elect you come September 19,” Orbih said.

The rally which was also attended by the Edo State Deputy Governor, Comrade Philip Shaibu witnessed the defection of two former leaders in the opposition All Progressives Congress APC in the ward.