Delta Governor, Senator Dr Ifeanyi Okowa, on Saturday extolled the virtues of the late former Commissioner for Housing in the state, Mr Joseph Ogeh, saying he was an intelligent professional.

He said at the funeral service of the renowned architect at Oghara-Iyede, Isoko North Local Government Area of the state that Ogeh’s contributions to the growth and development of Delta were remarkable. 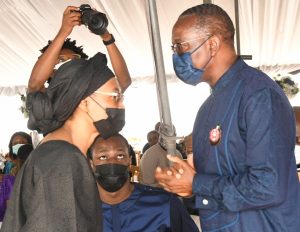 Okowa stated that the deceased was a great man whose death was a great loss to Isoko people, Delta and Nigeria, adding that he would be evidently missed, particularly for his impact in the affairs of the state and lives of people.

According to him, we have come here to pay our last respects to our brother who has departed at an age that we may ask why has the Lord taken him at 56.

“But, listening to our father in the Lord, I believe we have come here to thank God for the great achievements the late Arc. Ogeh made in his 56 years sojourn on earth.

“He was a very friendly and intelligent man and I had cause to discuss with him, especially when he served as Commissioner for Housing.

“He was somebody who loved to touch lives; he was outspoken and loved the church and his people.

“He was the supervising consultant in one of our projects which is nearing completion for the offices and official residences for the SSG and Chief of Staff, a masterpiece of architecture.

“I thank God that we are gathered in very large numbers to do him the honour of paying our last respects even as he returns to the Lord our God,” Okowa said.

He prayed for the repose of his soul and for the wellbeing of the family he left behind.

“When men are gone at such young age, usually there is always a challenge of how to organise the family.

“It is my prayer that the Lord God will guide his family because there is nothing God cannot do and we must pray that God Almighty will truly watch over the family.

“He has made his contributions, especially to the Isoko nation and his impact of being a help to others is well documented.

“It is a painful loss but God is able to fill the gap and it is my prayer that in years to come the family will look forward to glorifying the name of the Lord for worthy life their father and patriarch lived,” he stated.

In his sermon, Bishop Simeon Okah of Flock of Christ Mission, Warri, described late Ogeh as a man who pursued wisdom throughout his life time.

He said that Christians should strive to be remembered by the good things they had done and not for evil.

“Of a truth, he was a man of wisdom because there is no way you can achieve all that he achieved without wisdom.

“Ogeh may be gone but he lived example of a man who pursued wisdom all the days of his life.