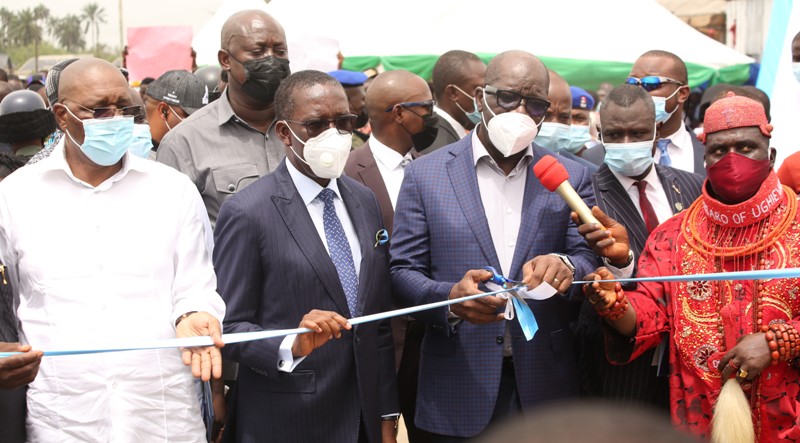 Edo Governor, Mr Godwin Obaseki, on Tuesday intensified call for upward review of 13 per cent derivation formula, saying it had remained inadequate for development of the South-South.

Obaseki made the call while speaking with newsmen after inaugurating Effurun-Otor-Ovwor-Olomu bridge and the rehabilitated 34-km Otu-Jeremi-Okwagbe Road in Ughelli South Local Government Area of Delta, executed by Governor Ifeanyi Okowa.

He said that the peculiarity of the environment in the South-South had made it quite expensive to develop infrastructure, especially roads, in the area.

The governor said that with the quality of projects being executed by Okowa across Delta, it was obvious that he would do more with enhanced funds.

He pointed out that the  inaugurated bridge and road projects would enhance the economy of the communities and also connect them to other parts of the state.

He said that Governor Okowa had moved up from “road master” to “bridge master” and described him as a “brilliant leader who understands the importance of roads and other infrastructure in the economic development of communities”.

According to him, Okowa is a champion of modern day democracy and represents the ideals of great leadership, particularly with the quality of work he does with the derivation funds.

He said that Okowa was not only building physical bridges but also building social, economic and community bridges.

Obaseki pledged the sustenance of the age-long relationship between Delta and Edo, and assured that he would invite Okowa to inaugurate projects in Edo in no distant time.

“Governor Okowa is a brilliant leader who understands the importance of roads and infrastructure in the lives of the people and communities, and that is why he has continued to prioritise the construction of roads in Delta.

“The construction of this bridge and roads will lead to the development of the communities and I must commend the governor for connecting the Urhobos and Ijaws with the Okwagbe road,” he said.

In his remarks, Okowa said that the Effurun-Otor-Ovwor bridge was one of the major requests of the people when he visited the communities in 2015.

He said that the vision of his administration was to connect Delta communities with roads, bridges and other basic amenities, adding that his administration had awarded contracts for no fewer than 500 road projects, with many already completed.

The governor commended the contractor of the projects, Obakpor Engineering Limited, for its engineering prowess and assured that he would deliver on the Ovwor hospital project in 2022.

“When I came to inspect the bridge while under construction, it was a very exciting moment even more exciting than what I saw today because I saw a traditional ruler walk on a wooden bridge to come and meet me on the other side of the bridge.

“Today, I believe that my joy knows no bounds because we have truly brought joy to the people of Ovwor-Olomu/Effurun-Otor.

“As the Commissioner for Works did say, we are currently continuing on the Trans-Warri road with several bridges and it is our hope that we will complete that project leading to Ode-Itsekiri in the course of our tenure.

“The Ayakoromo bridge is still undergoing construction, the Orere bridge in Ewu kingdom has just started.

“We made a promise last year and the project was awarded this January and it will cost the state government over N9 billion.

“The Benekuku/Kwale bridge has gone very far and it is about 75 per cent completed. We are hoping that by the end of the year, we should be able to commission that bridge.

“That bridge leads across to all the Agip facilities in Ndokwa East Local Government Area where we also have the gas plant and the power plant.

“We have also started the Isheagu/Ewulu bridge that links Isheagu town with Ewulu in Aniocha South Local Government and we will continue to do the best we can for our people,” Okowa said.

Commissioner for Works, Chief James Augoye, had said that the Effurun-Otor-Ovwor bridge was first awarded in 1979, re-awarded by OMPADEC in 1991 and abandoned, and later awarded in March, 2017 by the Okowa administration while Otu-Jeremi-Okwagbe road was awarded in March 2016 and completed in 2019.

Augoye said the bridge which was 100 metres and approach road of one kilometre was one of the many bridges that the administration embarked on.

Earlier in his welcome address, Dr Kofi had thanked Governor Okowa for placing premium on road construction in the state.

He said the succesful completion and inauguration of the Otu-Jeremi-Okwagbe road would restore economic activities in the communities, adding that his administration was inspired by the Okowa’s SMART Agenda to embark on the construction of internal roads in the council as well as skill acquisition programmes for youths in the area.

He said Ughievwen Kingdom is an investors’ haven as a major contributor to the nations oil and gas assets.

“It will be recalled that I led a delegation of the Ughievwen people to your office during your first term in office to request the construction of this road.

“With the construction of these roads we are now free from the hazards occasioned by the state of the roads until your kind intervention and we are eternally grateful to you our dear governor,” the monarch said.

He said with the construction of the bridge, the communities now have direct, seamless and stressless journey to their various destinations.

Representative of Okwagbe communities expressed delight on the inauguration of the road, adding that the community suffered untold neglect and hardship since 1980 when the administration of Professor Ambrose Ali started the project but was abandoned by subsequent administrations.