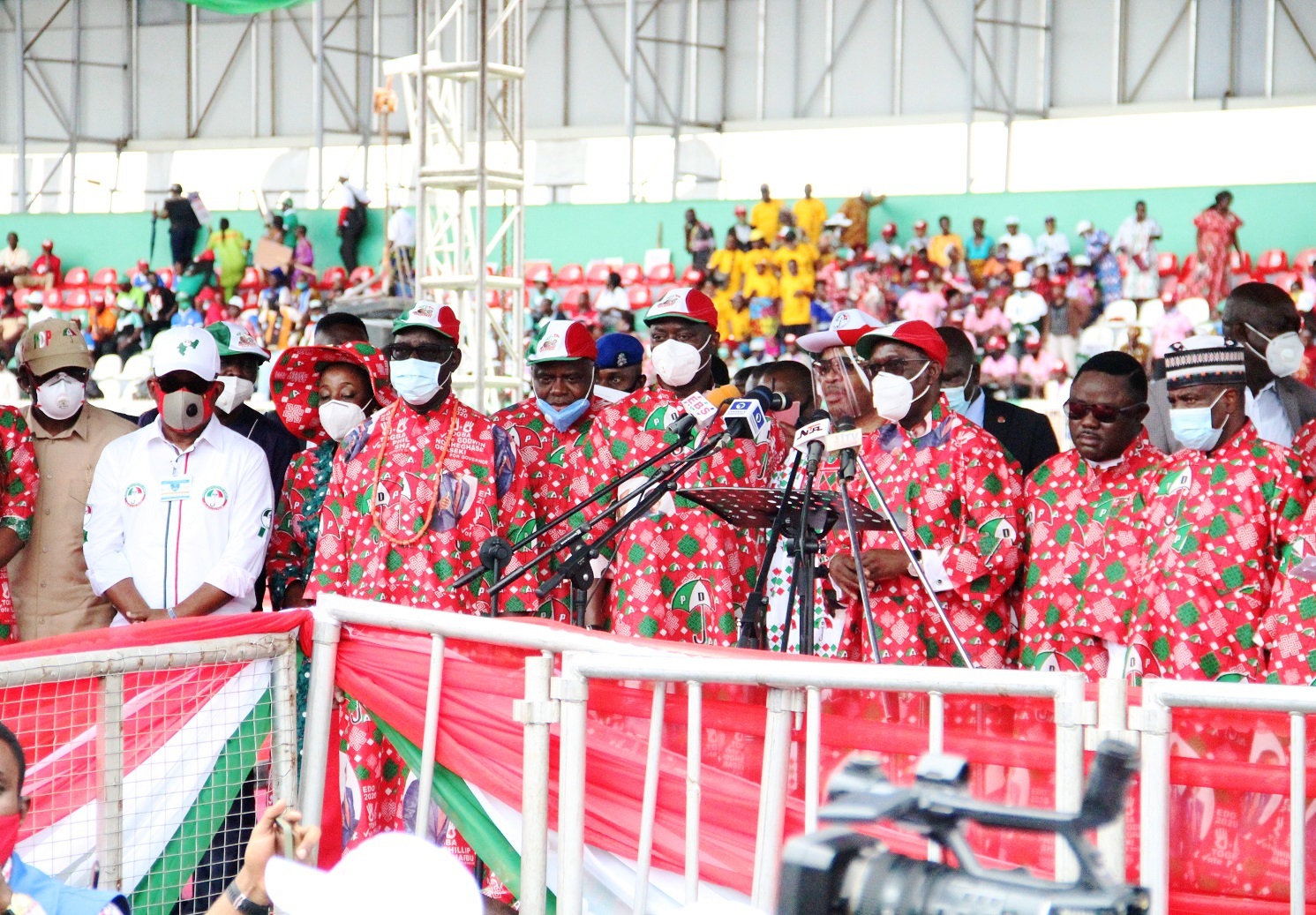 Delta Governor, Sen. (Dr) Ifeanyi Okowa, has urged Edo people to  re-elect Governor Godwin Obaseki in Saturday Governorship election, saying it is in their best interest to do so.

Okowa, who is Chairman of South-South Governors Forum, made the call at Peoples Democratic Party (PDP) rally at Samuel Ogbemudia Stadium, Benin City, on Tuesday.

He said that he and other governors of PDP were in support of Obaseki’s re-election because of his sterling performance in the past four years.

According to Okowa, if Obaseki did so much in his first term in office, in spite of all the challenges he encountered, it will be in the interest of Edo people to ensure that he is re-elected for a second term to enable him execute more development projects in the state.

He commended Obaseki and PDP in Edo for the Ward-to-Ward campaign for the Saturday poll, describing it as unprecedented.

He urged the electorate to be vigilant and ensure that their ballots would count, adding that they should not be afraid.

The governor assured the people that he and all his colleagues in the South-South would be on ground on Saturday to ensure victory for the party.

“Let me commend Governor Obaseki and the Edo PDP for their campaign which they went round all the Wards in the state.

“This is unprecedented and very commendable because it is the first of its kind for any governor to campaign from Ward to Ward.
Obaseki is one governor we are very proud of in the Governor’s Forum because of his high knowledge in economic development and good governance.

“He has done very well in this first term in spite of all the challenges he encountered in his former party and it is my firm belief that re-electing him for a second term is in the best interest of Edo people,” he said.

In his address, National Chairman of PDP, Prince Uche Secondus, called on Edo people to punish the All Progressives Congress (APC); by voting Obaseki for a second term, pointing out that Edo was not Lagos where one man was in total control.

On his part, Mr Nyesom Wike, Rivers Governor and Chairman PDP National Campaign Council for Edo Governorship Election, called on the people of Edo to turn out en masse to vote and protect their votes.

National Vice-Chairman of PDP in South-South, Chief Dan Orbih, said that the party was in good stead to win the Saturday polls as the people had resolved to vote and protect their votes.

He said that PDP’s main rival in the election relied on “Federal Might” to rig the polls, but that PDP in Edo was relying on God’s power and the people’s support to win.

Earlier, Chairman of PDP in Edo, Mr Tony Aziegbeni, had in his welcome address urged the people to stand firm during the polls  assuring that the party was behind them to ensure victory for Governor Obaseki.