by Editor in News, News Reel
Delta Governor, Senator Ifeanyi Okowa, on Monday, said Nigeria needs to expand the frontiers of its revenue generation to enable the country mitigate the funding challenges inhibiting its educational development.
Okowa disclosed this in an interview with journalists shortly after inspecting facilities at the Faculties of Engineering and Environmental Sciences at the Owa-Alero Campus of the University of Delta (UNIDEL), Agbor. 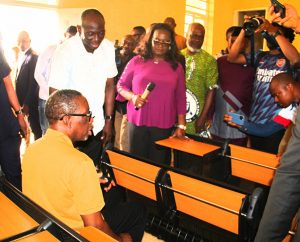 He stated that there was no doubt that the nation need to invest more funds in education in terms of infrastructure, human resource, equipment that is needed and in ensuring the availability of full internet services in every university in the country.

“If you look at the national budget and most of the state budgets, you will find out that both the federal and state governments are actually struggling through.

“When you have so many competing forces to deal with in an annual budget, you just try to put little funds across here and there.

“Because, in the first instance, you have to ensure that you pay salaries and if at the end of the payment of salaries you have little left, then it is a major problem.

“Whenever I studied the budget of the federal government, l feel very worried about the huge challenge we have as a nation because you find out that every single kobo that is actually going into infrastructural development or capital development is actually borrowed.

“So, when all your resource that is available outside borrowing goes into recurrent expenditure, there is a huge problem.

“And that is why if you actually study the budget in full at the federal level, what you tend to see is that in the individual sector such as education and health, you have very huge funds available for recurrent expenditure because of payment of salaries,” he said.

At the end, the governor said, “you only have between 10 to 15 or maximum 20 per cent for capital development, adding that this, in itself, was a very huge problem.”

The Governor stressed the need for the nation to find a way to reprioritise its priorities by beginning to look at the sectors that should be given greater attention.

“So, it requires a genuine analysis of what we are doing at the moment and then having a rethink to be able to take us to where we ought to be,” the governor added.

On the level of work so far executed at the Faculties of Engineering and Environmental Sciences at the Owa-Alero Campus of UNIDEL, he noted that work had progressed, adding that it was his hope that the work should progress a little faster

“I think the work we are seeing here has actually progressed considerably because the last time we came here, the work was at DPC level

“But it is still my hope that work can progress a little faster so that l can bring this to an end. What we are seeing here is the various facilities that would be required to enable a full take off of the faculties.

“Yes, some of the classrooms are ready but there is still work to be done and l am being told that in the next two weeks, they will complete the issues concerning the classrooms.

“But we can see the various other projects (the library, workshop and other things) that are nearing completion and we hope that very soon, they will be able to complete them.

“Looking at my back, we have some of the engineering equipment already supplied and we are hoping that we will be able to install them by the time the workshops and studios are completed.

“So, l have directed that we should do the best that we can to ensure that the workshops and studios are finished as quickly as possible

“I think it is a good site to behold and l just hope that in the next few weeks we can actually complete this job so that the place can be very functional at the end of the day, Okowa said.

While saying that the two faculties have been accredited by the National University Commission (NUC), the governor disclosed that lectures had since commenced in the campus.