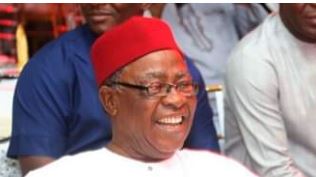 Governor Ifeanyi Okowa of Delta on Saturday, congratulated former Deputy Governor of the state, Chief Benjamin Elue, as he clocks 80.

He eulogised the renowned teacher, entrepreneur and politician for his humility, dedication and loyalty, which he had continued to exemplify in his commitment to the unity and growth of the state and the Peoples Democratic Party (PDP).

In a statement by his Chief Press Secretary, Mr Olisa Ifeajika, in Asaba, the governor expressed delight that the former deputy governor, at his age, had remained strong and supportive in the development of the state, and joined his friends and associates in celebrating his remarkable life of service.

He remarked that Elue was a loyal patriot, administrator, teacher’s teacher and an accomplished leader, whose invaluable service, particularly to Delta and its citizens would remain unforgettable.

Okowa said: “It is with profound joy that on behalf of my family, the government and people of Delta, I bring very warm felicitations to you as you celebrate 80 wonderful years on earth.

“As an octogenarian, you have lived a life of impact as an exemplary and accomplished teacher and later as Deputy Governor of our dear state from 1999 to 2007.

“That Delta remains largely blessed with loyal and humble deputy governors is no doubt traceable to your pioneering role in 1999 and as a role model and patriot, you served our state and country passionately, impacting lives in varying dimensions.

“Your humility and commitment to service is top-notch and this you demonstrated immensely in the several victories in all elections recorded by our party, the PDP, in the state, Delta North and your native Aniocha North Local Government Area.

‘’Your untiring efforts and commitment to the growth and development of your community and local government has attracted infrastructural projects to your people.

“On this special day of your life, I join your family to thank Almighty God for His guidance, protection and provision for you in the past 80 years of a life of humility and fulfillment.”