Delta Governor, Sen. (Dr) Ifeanyi Okowa, on Monday, commended the Nigerian Army for its commitment to the security of the state and the nation.

Okowa gave the commendation while flagging off the Nigerian Army 63 Brigade’s exercise ‘Still Water’, a military training exercise at the Brigade Base Camp on the Asaba/Benin expressway. 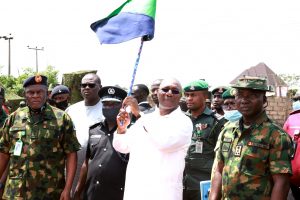 The Governor who was represented by his Deputy, Deacon Kingsley Otuaro, said military training exercises globally were conducted to avoid weaknesses, adding that the exercises were aimed at strengthening and accessing troop’s operational and combat readiness.

He observed that the 63 Brigade’s training exercise codenamed exercise ‘Still Water’ was strategic to broaden the knowledge and increase the combat and mental readiness of officers and men as untrained personnel would be devastating to the military.

He remarked that the growing security challenges in the country had placed training requirement in the army as key, adding that the Nigerian Army must be forward thinking, innovative and progressive in understanding how internal security and warfare are evolving and adapt to meet the challenges.

While assuring the Nigerian Army and other security agencies of his administration’s unalloyed support to engage in intensive internal security duties in the state, the Governor said the state had invested a lot in the security architecture in ensuring the security of lives and property of the people. 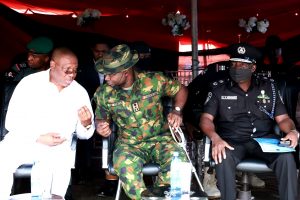 The Governor appealed to the military authorities to remain civil in handling the populace and commended the Nigerian Army for its resilience and determination in providing security in the state and urged personnel to be professional in their conduct to actualise the vision of the exercise ‘Still Water.’

“This administration has achieved a lot in reducing insecurity across the state to the barest minimum except for a few instances of armed robbery and kidnapping.

“We have invested a lot in the security architecture. I assure you that this administration remains committed to ensuring the security of lives and property of the people of the state.

“I assure the Nigerian Army and other security agencies in the state of my administration’s unalloyed support as you engage in the intensive internal security duties in the state.

“I also want to assure the 63 Brigade of the state government’s support towards the success of its exercise ‘Still Water.’

“While wishing you all a most successful and rewarding exercise, l urge you to be professional and committed to the vision and mission of the exercise as expected by the army authorities,” Okowa said.

The General Officer Commanding (GOC) 6 Division of the Nigerian Army and Land Component Commander, Operation Delta Safe, Major General Sani Mohammed said exercise ‘Still Water’ would be conducted in the four brigades under the division in all military formations and units.

The GOC 6 Division who was represented by Brig. Gen. Emmanuel Ikomi, noted that the exercise was being flagged off simultaneously in Akwa Ibom, Bayelsa, Rivers and Delta states and urged the troops to carry out their duties in line with stipulated rules of engagement.

According to him, the exercise would be based on real time intelligence on the prevailing security threats and would dove tail to checkmate real criminalities as the yuletide season approaches.

He said the exercise would be conducted jointly by troops of the 63 Brigade, Asaba, and personnel from paramilitary agencies drawn from the various commands in the state, stressing that it would also strengthen civil military relations.

He noted that the exercise would cover all areas of security concerns in the state particularly this ember months that usually attracted criminal activities hence the need to checkmate the rise within the state.

Brig. Gen. Idris expressed hope that the exercise ‘Still Water’ would create the conducive atmosphere for residents to move without fear of threats from hoodlums.