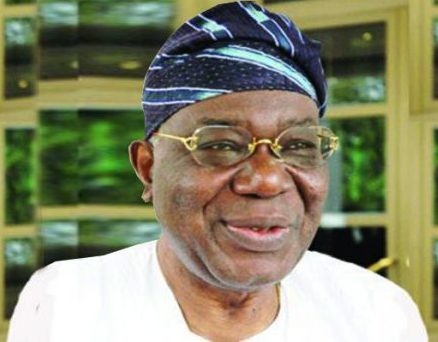 Governor Ifeanyi Okowa of Delta State has sent condolences to the Shonekan family and the Government and people of Ogun State on the death of former Head of Interim National Government, Chief Ernest Shonekan.

Shonekan, a lawyer and former Chairman of United African Company (UAC), died in Lagos on Tuesday at the age of 85.
The elder statesman was the head of the interim government between August 26, 1993 and November 17, 1993 when he was ousted in a coup led by late General Sani Abacha.

In a statement in Asaba by his Chief Press Secretary, Mr. Olisa Ifeajika, Okowa also commiserated with the Alake of Egbaland over the loss of the Egba chief and great boardroom player.

He recalled that the late head of state founded Nigerian Economic Summit Group, an advocacy group and think-tank for private sector-led development of the Nigerian economy in 1994.

He said that the deceased’s regular counseling on national issues and mediations for peaceful co-existence would be missed by Nigerians and leaders.

“On behalf of my family, the government and people of Delta, I join the entire nation and the people of Ogun State to mourn the passing of former Head of Interim National Government, Chief Ernest Shonekan.

“Chief Shonekan worked assiduously to improve the economy and livelihood of many poor and underprivileged Nigerians in the short period he served as Head of State.

“As a senior lawyer and foremost boardroom professional, Chief Shonekan was a legendary leader in public and private sectors where he dedicated his life to the service of our nation in several capacities.

“His unwavering commitment to the unity of Nigeria had been a major encouragement to many governments, and I recall the personal sacrifices he made in helping to sustain governance in the twilight of Gen. Ibrahim Babangida regime.

“As a country, we will miss his wise counsel on national issues and peaceful co-existence, especially now that the nation is largely divided on political, ethnic and religious lines,” the governor said.

He prayed that the Almighty God would receive the soul of the former leader and grant his family the fortitude to bear the loss. Delta to complete ongoing projects in 2022