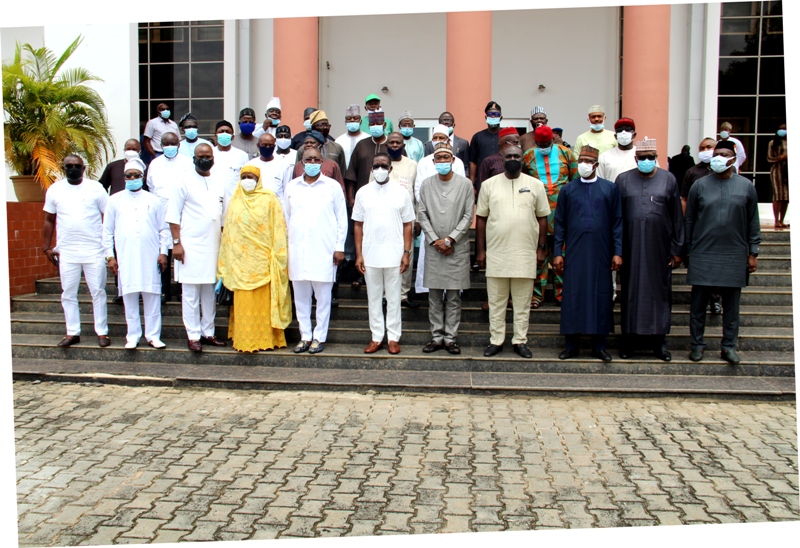 Delta Governor, Sen. (Dr) Ifeanyi Okowa, has called for a review of the existing revenue allocation formula in favour of states and local governments, in reflection of current socio-economic realities in the country.

Okowa made the call when he received on a courtesy call, the National Executive Council members of Association of Local Governments of Nigeria (ALGON) led by the National President, Mr Kolade Alabi, in Asaba on Thursday.

He said that the review of the revenue formula had become expedient in view of the huge responsibilities facing states and local governments in the country.

According to the governor, the local government administration is growing and it is our hope that we get them stabilised financially so that they can impact on the lives of our people.

Insisting of the restructuring of the sharing formula, he said that there were lots of things being done at the national level that ought not to be done at that level.

“I believe that local government administration must be autonomous and here in Delta, we have never tampered with their funds, rather we assist them and provide bailout funds for them on a monthly basis to augment their payment of salaries.

“We have generally as a nation, made local government administration take up serious responsibilities like payment of local government council staff and primary school teachers salaries without providing the necessary funds for them.

“We need to have a re-work of the revenue allocation formula because none of the arms of government should shy away from that.

“We need to be able to provide funding so that they can reach out to the people and the people will feel their impact.

“The Federal Government is an important tier of government but they can’t perform well in terms of reaching out to the various communities because of the issues of monitoring and evaluation.

“There is a need to re-work the laws of this nation in such a way that we are able to redirect governance the way it ought to be done,” he said.

Earlier, ALGON President had said that the group was in Delta for its national executive council meeting and that the choice of the state was in recognition of the sterling accomplishments of Governor Okowa in local government administration.

He said ALGON was not a pressure group or a contract-awarding group, but a partner in developmental governance.

On teachers’ salary increment announced by the Federal Government on Tuesday, Alabi said that ALGON was not against it but pointed out that states and local governments should have been part of the decision.

According to him, teachers’ salaries are within the purview of the states and the local governments and we have it on good authority that the governors were not consulted.

“We therefore advocate for a review of the revenue sharing formula because if there is a review to release more funds to states and local governments we can now handle our affairs as regards increment in teachers’ salaries and all other things begging for attention of local governments,” he stated.

On his part, Chairman of ALGON in Delta, Mr Itiako Ikpokpo, thanked the association’s president for choosing Delta to host the NEC.

He said that over the years there had been a strong consistency in efforts at ensuring that local government administration got better.

Ikpokpo, however, said that the running of local government administration in Delta was a reference point for other states to emulate.