Delta Governor, Senator Ifeanyi Okowa, on Friday, called on Nigerians to emulate the late Judge of the Supreme Court, Justice Samuel Oseji’s virtues of humility, simplicity and hard work in order to make the Nigeria a better place for all.

Okowa made the call at the funeral service held at Idumuje-Unor, the community of the late Jurist, in Aniocha North Local Government Area of the state.

He noted that Oseji, who died at the age of 67, was a noble man, a man of integrity and a man that loved all, saying that if Nigerians could imitate him, lives of citizens and the nation could be much better. 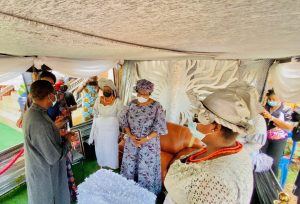 While thanking God for the life that the late Justice Oseji lived, the governor remarked that he was a man full of wisdom, and that the deceased drew strength from God as he surrendered his life to Him during his lifetime.

According to him, the late sexagenarian judicial officer never believed that he could do anything without God, and God was always with him even as He (God) is with him today.

“As we move out of this place, l pray us to think about the life of our brother, the late Justice of the Supreme Court and find ways of helping us to communicate the kind of person he was to the minds of Nigerians.

The governor pointed out that Justice Oseji would be remembered for all that was good, and said “It is really a difficult moment for me because I have come to know him just beyond one that one would refer to as a brother in the Supreme Court.

“He was a kind man that wherever he went to, you would but love him. I condole with our Permanent Secretary, his wife, Dr. (Mrs.) Mininim Oseji and the children as well as all other members of the family.

“It is a very difficult thing. We will say don’t cry because the Lord is with you, but we know it is difficult. Tears must come and it will come regularly but just have your trust in God.

“I also condole the Justices of the Supreme Court. He had become a brother to them all and l must thank them for doing this state proud by coming in their large numbers.

“I can see that there is a full compliment of the Supreme Court here. It is because of your love for him. He was with you just for a few months but you have shown so much love as if you had known him for several years.

“We appreciate all Justices of the Court of Appeal where our brother worked before he was elevated to the Supreme Court.

“When l was told the number of persons coming from the Court of Appeal, l say l wish that people could have this infectious character that enables men to cleave to him (Justice Oseji) because that is exactly what Justice Oseji was.

“We thank God for his life. And even when most of us would wish to cry, one thing that we know is that Justice Oseji lying out here today had accomplished his tasks on earth and that is the reason that the Lord, our God had called him at this time.

“It is not about how long you lived ,but it is about the impact that you made in the lives of people,” he said.

Earlier in his homily, Bishop Wale Ajayi of Church of God Mission International, who made references to the Bible, had said that the late Justice Samuel Oseji slept in Jesus Christ because, he put his faith and confidence in our Lord Jesus Christ.

Ajayi disclosed that the late Justice Oseji was a devout Christian who put his total faith and confidence in Jesus Christ, adding that the deceased jurist vehemently believed that Christ died for him, that Christ rose from death and that Christ will come again.

He, therefore, prayed the Almighty God to grant the bereaved family the fortitude to bear the loss of their patriarch by strengthening and protecting them always.

In his remarks during the ceremony, son of the deceased legal icon, Mr. Samuel Oseji (Jnr.), expressed appreciation to Delta State Governor, Senator Ifeanyi Okowa for the immeasurable love he had shown to the family, and thanked Justices of the Supreme Court and Court of Appeal as well as other members of the legal profession for being with them in their moment of grief.

Shortly after the funeral service, the remains of the erudite jurist were taken to his home for interment.

The ceremony was attended by the wife of the governor, Edith; Justices of the Supreme Court and Court of Appeal; the state Chief Judge, Justice Theresa Diai; the President, Delta State Customary Court of Appeal, Justice Pat Elumeze; the Minority Leader, House of Representatives, Rt. Hon. Ndudi Elumelu among other top government functionaries.