Reason we ‘re constructing more roads in Okpanam – Okowa 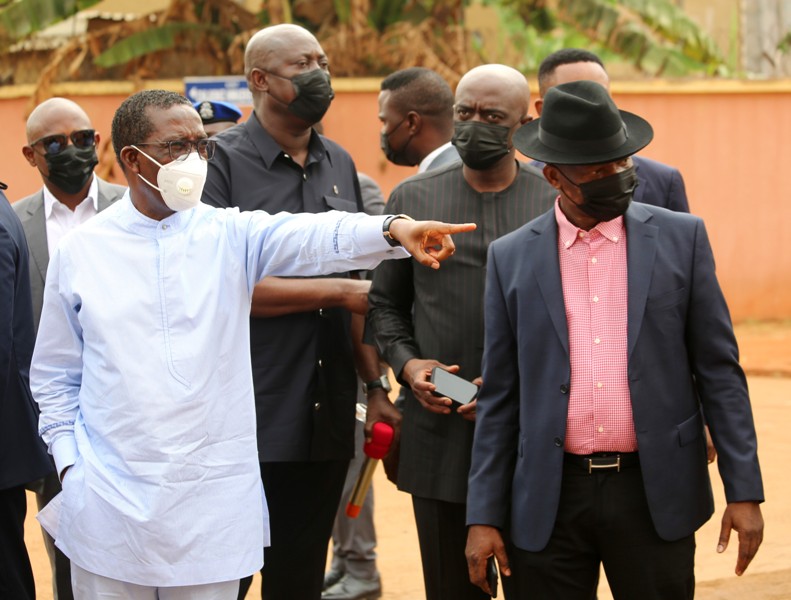 Governor Ifeanyi Okowa of Delta on Monday said his administration embarked on massive construction of roads and storm water drainage projects in Okpanam to check siltation emanating from flood in the community into Asaba.

Okowa stated this while speaking to newsmen after inspecting 28 internal roads in Okpanam, spanning over 11 kilometres and 20 kilometres of drains which have been completed and ready for inauguration.

He stated that government embarked on the projects after a careful study by experts, and explained that tackling erosion and flooding problems on Okpanam necessitated the construction of the roads.

The governor called on the people to stop dumping refuse in drains to avoid blockage of the water channels.

He noted that many civil servants live in Okpanam and had made it imperative for government to provide amenities for the residents and others living in suburbs of the capital territory.

“As a government, it is our duty to provide for all, both those within the main capital and others who are within the capital territory.

“We have been tackling very major erosion and flooding problems in Asaba and most of the water normally come in from Okpanam.

“In the study that was done, it was clear to us that beyond the storm drainage projects that we are doing, that we really need to pave as many roads as possible to be able to slow down the effect of siltation which was also causing a lot of problems, otherwise the very major drains that were constructed will become silted in a short while.

“Having done the study, it became obvious that many of the roads in Okpanam will need to have drains into the main drain at Okpanam road and from there it will connect to the major sewage which takes us down to the rivers.

“It’s not just enough to do the drains, it has to be followed with the pavement of the roads and that’s why you have these several network of roads that have been paved and you can see that each of them has drains on both sides and the roads are fully paved,” he said.

Okowa disclosed that the people had started taking advantage of the road network in the area, with massive development in varying degrees.

“You can see that this area cannot be truly a suburb anymore; you have seen the kind of development that is going on along the various road projects that we have trekked through.

“I believe that Asaba and Okpanam have now become twin-towns even though they belong to two different local government areas.

“Many of our civil servants and many persons who also work in Asaba also live in Okpanam, so the capital territory is growing and it’s important that whatever development we are doing in Asaba, we should also impact very strongly on the development in the towns that are adjoining to it,” he said.

He assured that more roads would be built in Okpanam, “we have taken the very critical roads from the study even though Okpanam is a very big town and there are still roads yet unpaved but as we progress into the future we will continue to consider paving more roads.

“You realise that we have a lot of work on our hands because so many towns and villages in Delta have to be developed across senatorial districts.

“There are a total of 28 roads spanning 11 km and over 20 km of drains that we have done in this two contract jobs that we awarded here. It’s quite extensive and we will continue to do the best that we can within the limits of the resources available to us.”

On marked buildings, the governor said “the implication is that either they don’t have approval or they have exceeded the portion of land that they are supposed to build on and that means that they have violated the law and obviously the relevant ministry will continue to do what is right.

“I also appeal to the people to stop dumping refuse in the drains and destroying what government has done for them and I call on the Waste Management Board to deal decisively with offenders.

“Our people are very difficult and we have continued to appeal to them; in fact, it’s very unfortunate that people will see things done to uplift their lives but they will decide to mess it up.

“It is a very unfortunate incident, but I have already directed the SSG to call the Waste Management Board to visit this whole area and look at what is going on and those who have done that which is wrong will also be treated in a way and manner that they will understand.

“But, we will continue to appeal on the radio and in other means. We have continued to appeal to our people not to dump refuse in our drains but some people are just stubborn, so the Waste Management Board will do what it is supposed to do and those who ought to be fined will also be appropriately fined,” Okowa stated.