The Governor of Sokoto State, Rt. Hon. Aminu Tambuwal has commended Governor Ifeanyi Okowa for enhancing the socio-economic life of Deltans through his sustained commitment towards promoting good governance in the state.

Tambuwal who is Chairman of Peoples Democratic Party (PDP) Governors’ Forum was speaking in Asaba while inaugurating the Mariam Babangida dual carriageway which was constructed by the state government, said that Okowa has been demonstrating strong strength in providing excellent leadership.

He noted that the Okowa led administration in the state was doing quite more in terms of infrastructural development anchored on the threshold of good governance, pointing out that he was, also happy that the dual carriageway was named after Maryam Babangida.

While saying that he was delighted to have been invited to perform the official inauguration of two roads in the state, the Chairman of the PDP Governors Forum stated that the PDP family in the country were impressed with the performance index of Governor Okowa.

“Governor Okowa has done very well in providing good leadership in all aspects of governance,” Tambuwal said, noting that Delta State government had, apart from its exploits in roads infrastructural development initiative, done well in the areas of educational development, empowerment and human capital development among other sectors of the state economy.

While, also, performing the inauguration of the 7.5 kilometres Ogwashi Uku /Ubulu Uno Road in Aniocha South Local Government Area of the state equally constructed by the state government, the Sokoto State governor noted that the road was strategic to the growth of the town, even as he affirmed that the road would among other benefits, connect the town to other parts of the state. 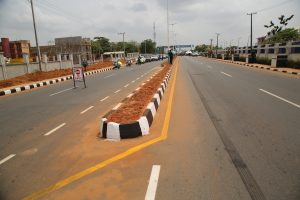 Earlier in his remarks during the inauguration of Maryam Babangida Road, Governor Okowa noted that the road was strategically unique to the people and government of the state as it houses the most important aspect of governance in the state such as the old and new state secretariat complex, Asaba division of the Appeal Court Complex, Central Bank of Nigeria (CBN), Asaba branch and the state library complex among others.

“Apart from the fact that road is very important to us, it is named after a dear daughter of Asaba and Delta State, Maryam Babangida; the road houses the most important aspect of governance in the state.

“First, we have the old secretariats (two of them) and the new secretariat complex that is coming up which, in the next few months, would house all the state government ministries, departments agencies with the support of the two existing old secretariats. I am sure that we took the right decision to truly dualise the road,” Okowa added.

At Ubulu-Uno, Okowa said that the Ogwashi-Uku/Ubulu-Uno Road project became necessary following the inability of people to access the agrarian community in both dry and rainy season, pointing out that the palace road in Ubulu Uno would be looked into when the economy improves.

On the COVID-19 scourge posing health risk globally, Okowa urged Deltans to observe all precautionary measures, affirming that his administration was doing its best to keep the virus in check should there be any incidence in the state.

Meanwhile, he commended the people of Aniocha South for their peaceful disposition and support for his administration, just as he pledged to continue to pursue programmes and projects with direct bearing on the lives of Deltans.

Also speaking in Asaba during the inauguration of Mariam Babangida Road, the Commissioner for Works, Chief James Augoye said that the drainage on both sides of the dual carriageway was made up of 2.46 kilometres with a shoulder of 1.5 metres, adding that the length of the road was 1.88 meters.

He disclosed that before 2018, the road was not motorable, a development, which according to him, made some of the property owners on the road to sell them as a result of inaccessibility to their property.

On the 7.5 kilometers Ubulu Uno/Ogwashi Uku Road project which has 12.8 kilometres drains, the Commissioner said that the road project was executed with high professional acumen because of the terrain to enable it stand the test of time.

In their separate remarks, the Chairman of Oshimili South Local Government Area of the state, Comrade Uche Osadebe and his Aniocha South counterpart, Chief Isaac Anwuzia as well as the Obi of Ubulu Unor, Obi Kikachukwu Afamefune who spoke through Professor Jiff Mokobia, applauded Okowa for executing the road project, just as they pledged their loyalty to his administration in the realisation of the stronger Delta Vision.